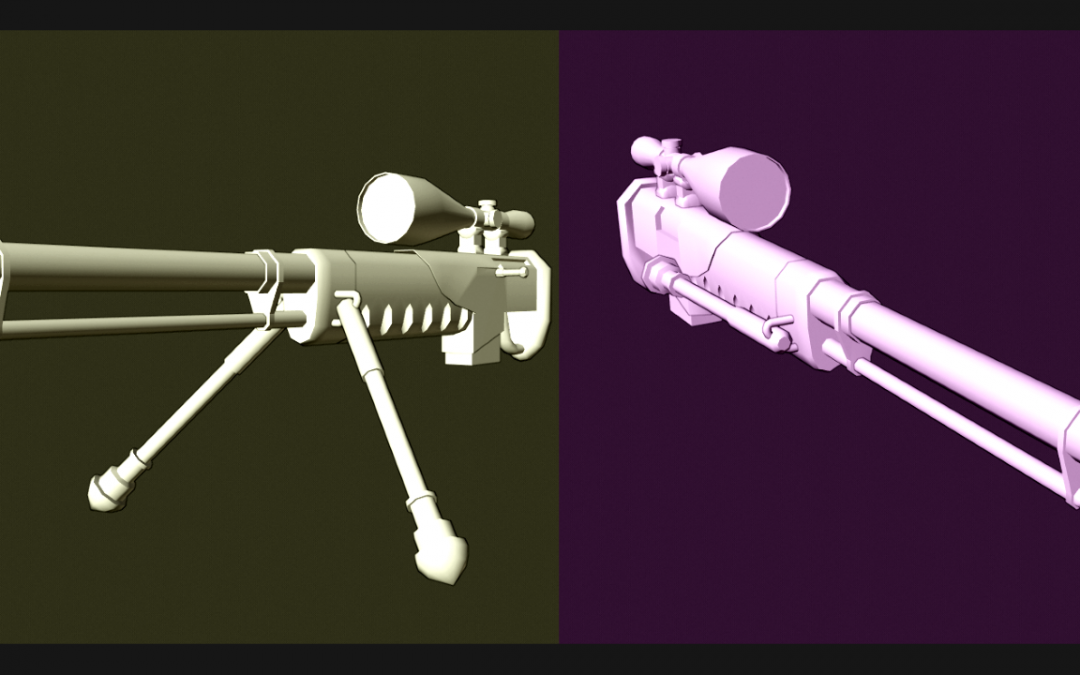 I’ve spent the last couple of weeks modelling weaponry for my upcoming light strategy game Invasion Live. Although I’m pretty happy with some of the models shown below the textures are not final.

One chonky Minigun. It’s job is to do a small amount of damage to a lot of targets in a short time. In game I envision it will be used for taking care of swarms of enemies but will really struggle to take down strong single targets with a lot of health.

The extendable barrels serve a dual purpose. The first is (obviously) to make the gun look as badass as possible. I especially find it amusing that the big gun extends into a ridiculously big gunafter it’s been set up.

The second purpose is that this weapon needs to be carried to the firing platform by some poor soul. Retracting the barrels and removing the tripod will make it look less impossible for one person to carry.

All in all it’s pretty intimdating and should be great with a few tweaks, particles and sfx to spice it up a little.

A huge sniper rifle with a big-ass scope for accurately and slowly delivering a huge hit to one unlucky target. Essentially the opposite of the minigun, this weapon will be used to take down big strong targets but will be easily overwhelmed by numbers.

This rifle has an attached bipod which folds up and also features a similar retracting barrel to the Minigun which will allow the weapon to be carried between positions more easily.

This weapon will also require a crew of three. A support to carry the gun and rotate the firing position. A spotter to carry a big pair of binoculars (not pictured) to pick targets and an Operator to carry the scope and fire the weapon.

It’s pretty badass, the picture above doesn’t do justice as to quite how ridiculously big this gun is. It’s closer to a cannon really.

The bottom tier gun in the game. It fires slow and does very little damage. The bonus is that this gun can be operated easily by a single person so you can have four of them in a single team. Although this is going to be the games most underwhelming weapon it will still have strengths that make it useful throughout the game.

For a start it will be cheap and often the first gun crew you purchase in a level will be armed with these. Also because the gun crew will consist of a few pairs of eyes this gun crew will have a very wide firing arc making them perfect for mopping up enemys that may have slipped past the less flexible big guns.

These way these weapons behave will be heavily dependant on what kind of ammo the player has developed for them. I sent out more details about how this will work to the people on my mailing list. To sign up visit this link and get free music, information and access to future betas here: https://mailchi.mp/2f69a3777d37/wyvernware